I replied to an earlier ticket on this but wanted to make sure you have the info. as well. To combat spam email service providers have implemented some tools that require anyone sending email from their own domain to set up some records that help prove that email that says it comes from them is legit. Initially they put the new rules in place with loose enforcement -- instead of not being delivered a message that didn't have the correct record would get flagged as possible spam. The idea was to give people time to implement the new system.
At some point fairly recently Google -- and many others -- decided there has been long enough for everyone to get configured and they started rejecting emails that don't have those settings configured. Your club does not, as you can see here:
https://mxtoolbox.com/SuperTool.aspx?action=mx%3ahollinmeadows.org&run=toolpage

That isn't something we control as your club manages it's own domain name with a registrar called JustHost. It's something that we don't have access to.
The basic problem is that our server is sending out email for your club. When it gets to Gmail or wherever they are checking your records at JustHost and there is no entry that says "Member Splash is allowed to send mail for us" so it gets rejected. Until that record, called a DKIM record, is put in place you'll have deliverability problems whether using a forwarder or an actual email account. Initially I mis-understood what your issue was and suggested using regular email accounts but later was able to track down what the actual problem is.
If you'd like us to fix it for you we'll just need the information to log into the Just Host account. Otherwise whomever manages it at the club will need to correct that.
Below is what I sent to Ryan Kennedy on the 20th explaining the solution. You could also simply provide that to JustHost and ask them to add the appropriate record for you.
Again, I understand it's frustrating but it isn't anything that is in our control. Our server is correctly configured to handle your mail, it's your JustHost account that needs to be corrected. 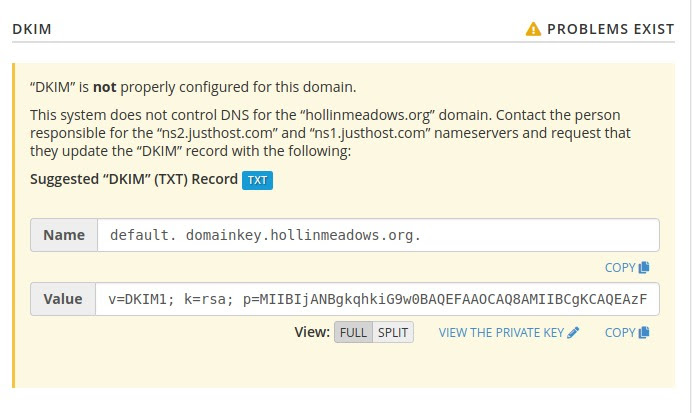 J
Josette is the author of this solution article.

Did you find it helpful? Yes No

Send feedback
Sorry we couldn't be helpful. Help us improve this article with your feedback.